Concepts Of Physics: What Is Free-Fall And What Factors Affect It?

What do Newton’s falling apple, sky-diving, drop tower rides and the asteroid that killed dinosaurs have in common? They are all examples of objects in free-fall, one of the concepts of Physics, introduced in Class 9. Careers360 explains the physics of falling — gravitation, free-fall, air resistance — with numerous examples and illustrations.

What do Newton’s falling apple, sky-diving, drop tower rides and the asteroid that killed dinosaurs have in common? They are all examples of objects in free-fall, one of the concepts of Physics, introduced in Class 9. Careers360 explains the physics of falling — gravitation, free-fall, air resistance — with numerous examples and illustrations.

The free fall of an apple from a tree completely changed the discourse in Physics. English physicist and mathematician Isaac Newton framed the theory of gravitation in the late 1660s after watching an apple fall — or so the story goes. He wondered why the apple fell straight down, rather than moving sideways or even upward. He showed that the force that makes the apple fall, and that holds us to the ground as we stand or walk, is the same force that keeps the moon and planets in their orbits.

“The state of motion of the body in which the object is released and it is falling only under the influence of gravity i.e., the gravitational force is the only force acting on the body is free fall”.

Some examples of free-fall motion in physics are:

Let us understand the physics behind free fall

If we release a ball (initial speed =0) from height ‘h’ (neglecting air resistance) above the earth’s surface, the only force acting on the ball is gravity.

As ‘h’ is very small compared to the earth’s radius, the gravitational force acting on the ball is almost constant throughout the journey. 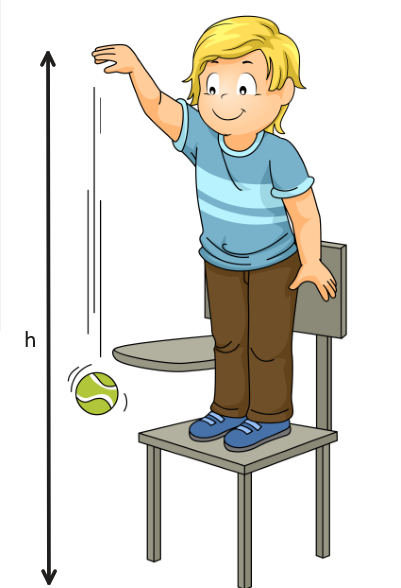 Concepts of Physics: 'H' is the height above the earth's surface(Image: Shutterstock)

In another form, it can be written as

Here v is the speed with which it strikes the surface, above mentioned are the formula of free-fall motion parameters

When objects fall through the air, it opposes the relative motion. This opposition offered by air is called “air resistance”. Air resistance affects different shapes differently.

To understand this concept better, let’s see some of the most famous examples of free-fall motion.

An Italian astronomer, Galileo had given a theory in which he concluded that in a vacuum, all falling objects would accelerate at the same rate regardless of their size, shape, or mass. This was a well-established theory but to reassure in a medium with no air resistance i.e., vacuum, in Apollo 15 mission, Commander David Scott performed a live demonstration for a television camera. A geological hammer(1.32 kg) and a falcon feather(0.03 kg) were dropped at the same time from the same height approximately 1.6 m. The motion of objects was observed and it was found that they strike the lunar surface at the same time which was in agreement with Galileo’s theory. 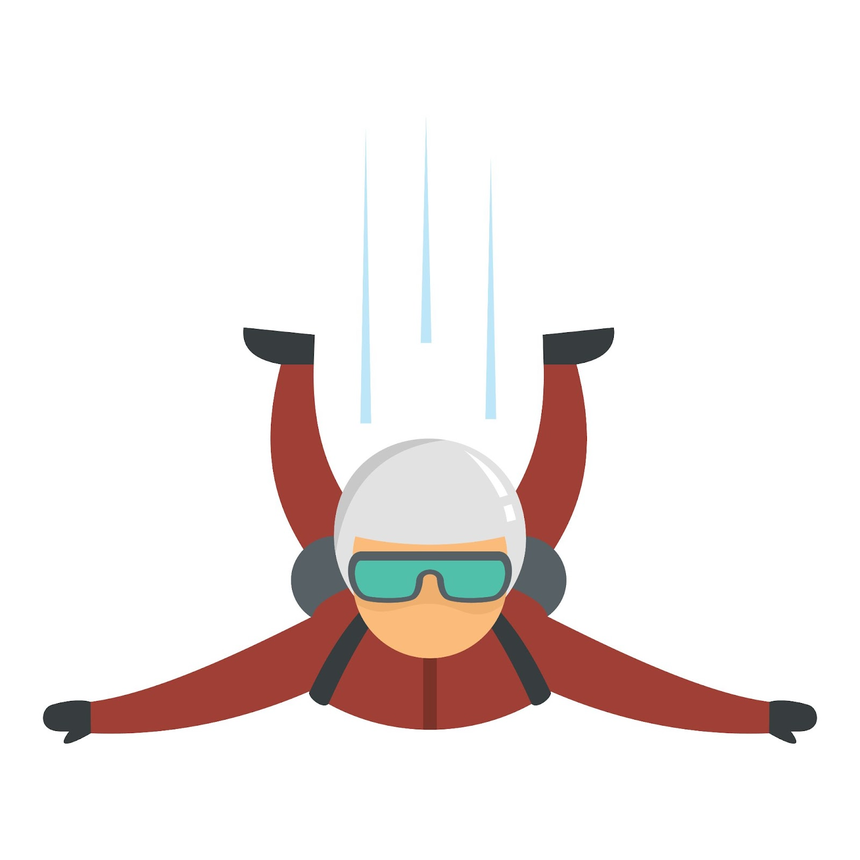 A skydiver when falls from the aeroplane door under the influence of gravity (g=9.8 m/s2) gains speed with every passing second as per the equation

The negative sign indicates that the acceleration due to gravity is directed in the vertically downward direction. The increase in velocity in the downward motion is opposed by the drag force due to air resistance. This drag force is opposite to the direction of motion and proportional to the magnitude of the velocity

. The drag force increases until it becomes equal to the gravitational force, the velocity at which the net force becomes zero is said to be terminal velocity.. 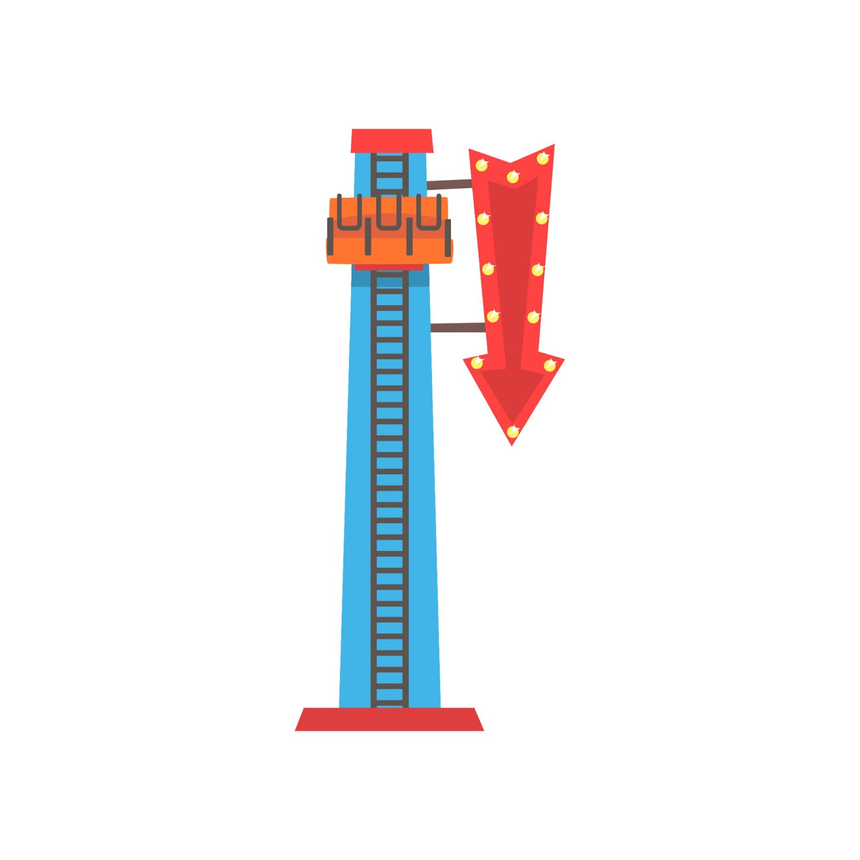 The car when taken to the top it is stopped for a moment so as to make its initial velocity zero for the downward motion.

After a moment of suspension, the car is let to fall under the influence of gravity undergoing acceleration of g=9.8 m/s2 in the downward direction. The height of the drop tower is normally 10 m. So, if we calculate the speed with which it reaches the ground when released by applying the kinematic equation we get,

If the passengers are hit with this enormous speed vertically downward it would be fatal to prevent such a mishap an exit track is built by ride designers. The car is attached to this track, which gradually curves toward the ground. A stretch of the straight track allows the car to slow down and brake, producing a controlled stop at the bottom that keeps passengers from getting injured.

The Free Fall Of The Meteor That Killed Dinosaurs

Location of crater form due to the meteor that killed dinosaurs

An asteroid, roughly 10 km (6 miles) across, was under free-fall through the atmosphere and hit Earth about 65 million years ago. This impact made a huge explosion and a crater about 180 km (roughly 110 miles) across.

The asteroid hit at high velocity and effectively vaporized upon hitting the earth. But it made a massive crater, devastating the immediate area. A huge blast wave and heatwave issued from it, flinging vast amounts of material up into the atmosphere. It sent soot travelling all around the world. This film didn't fully block out the sun but reduced the amount of light that reached the Earth's surface. It impacted plant growth.

The shockwave from the asteroid's landing on the Yucatan Peninsula in Mexico devastated the immediate area. It was a massive event affecting all life on Earth, leading to the extinction of roughly three-fourths of all species that existed at that time, including the dinosaurs.

Many asteroids of this type are now known and their orbits pass through the inner solar system and cross Earth's orbit. Some of these could potentially hit Earth in the future.

Most, but not all, are smaller than the one that hit us 65 million years ago.