How Does WhatsApp Code Your Message? This Is Where Encryption Starts

Detecting patterns and interpreting them is at the heart of the process of encryption and decryption – a mathematical process of making communication secret and secure. The ability to identify patterns can help understand the principles behind cryptography, solve problems in a range of aptitude tests and even help students locate clues and patterns in exam questions. Here’s how it works.

Detecting patterns and interpreting them is at the heart of the process of encryption and decryption – a mathematical process of making communication secret and secure. The ability to identify patterns can help understand the principles behind cryptography, solve problems in a range of aptitude tests and even help students locate clues and patterns in exam questions. Here’s how it works.

We all know the legend of how Sir Isaac Newton discovered the force of gravitation after watching an apple fall from a tree. Were apples not falling to the ground before him? Of course they were! Gravitation had always existed, for anyone to discover it. But it needed a sharp mind who could see the everyday event of a ripe apple falling to the ground in a new light, from a different perspective and wonder about the process behind it.

In fact, most new discoveries and innovations in the world were the result of people viewing ordinary things from a different angle, asking questions and identifying patterns behind them. Patterns and their identification are at the heart of the technique of secure communication called cryptography.

Let us say you, Ramesh, are sitting in your classroom and observe something funny. You want to share it with your best friend, Suresh. But there is a problem. You like to break rules and make noise and to keep you out of trouble, your teacher has made a classmate, Dinesh, sit in between. How can you pass a message to Suresh without Dinesh reading the contents? During a break, you and Suresh devise a plan: you will shift each letter of the word by one letter. To represent the letter “a”, you will write “b”; for “b”, you will write “c” and so on.

After recess, you put your plan in action and code your message – a process called encrypting – and write the following on the chit and ask Dinesh to pass it on to Suresh. 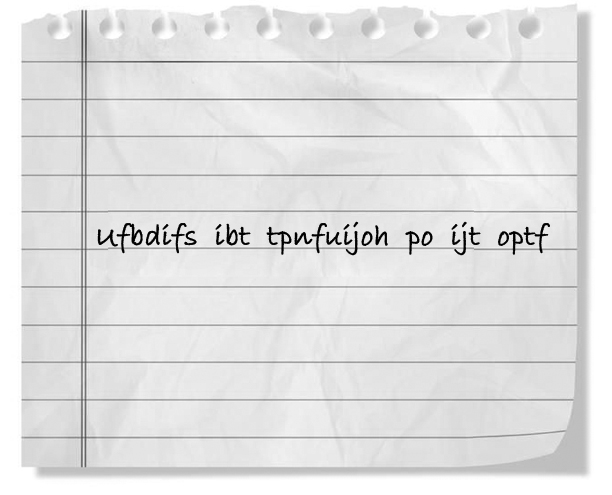 As Dinesh does not understand it, he passes it to Suresh who decodes it – called decryption –. He translates “u” back to “t”, “f” back to “e” and so on. We would like you to pick up a pen and paper and decode the message.

If you are able to decrypt this, then congratulations, you could have decoded any secret message of Julius Caesar, the great Roman Emperor who ruled around 2000 years ago. Since this technique was used by him, this is called a Caesar Cipher. Using this technique, you can also switch each letter with any number from 1 to 26.

There is a very interesting story about how a way to decode a Caesar Cipher was found that worked almost every-time. 800 years after Caesar, an Arab mathematician noted that when a good number of sentences are written in any language, there is always a letter which is used the maximum number of times. For example, in English, the letter ‘e’ is used the maximum number of times. So, if we take a long enough Caesar Cipher message, and observe that “h” is the most-used letter in it, then it is probable that in this code, the letters are shifted by 3, as “h” is obtained by shifting “e” by 3.

Now let us go back inside our classroom. As the exchange of chits is frequent, Dinesh has started to observe some patterns and one day while in the process of passing the chit, you see Dinesh, too, trying to write something and then smiling. So, now he knows your trick and you need a new one.

Now, you devise another strategy. You pick a number – say, 23 – and decide that for the message the first letter will be shifted by 2 letters, second by 3 letters, then third again by 2 letters, fourth by 3 letters and so on. So, to encode the word ‘Teacher’

a: Shifted by 2 letters becomes c

This will be a lot more difficult for Dinesh to decode.

If you have a very large number, say 1793223456, it will become practically impossible to decode the message with pen and paper. We use computers for encrypting and decrypting on a large scale.

A very important application of encryption and decryption lies in sending personal messages and sensitive data over the internet. For example, if you are using internet banking and you send your password to the bank website to login to your bank account, you would not like some hacker to read the message. So, it is encrypted by using different mathematical tools so that it remains safe. All the secret communications between defence forces and intelligence agents utilize some form of encryption.

In your studies too, many times you have to identify patterns and markers in questions that give you a hint about the procedure to be used to solve it. Many students who are able to solve questions in the classroom, struggle during exams. One reason for this is that while studying, they solve questions related to a certain topic, and therefore, know they have to apply the formula or procedure related to that topic.

In an exam setting, where questions are not nested under topics, students struggle if they don’t develop the habit of identifying the markers in the questions themselves. And in the exam, they get many questions that are related to more than one concept. So, build the habit of looking at the questions and detecting traits that can give you a clue about the method to be used. And this habit only comes with a conscious effort and practice.

We leave you with some fun exercises based on the Caesar Cipher. Try to identify the original message in each of these