Even top engineering colleges struggle to find all BTech students jobs through campus placements. The top five National Institutes of Technology (NIT), taken together, could only place under 80% of their graduating BTech students according to NIT placement data shared with the National Institutional Ranking Framework (NIRF). Placement records and even average salary packages vary widely.

Even top engineering colleges struggle to find all BTech students jobs through campus placements. The top five National Institutes of Technology (NIT), taken together, could only place under 80% of their graduating BTech students according to NIT placement data shared with the National Institutional Ranking Framework (NIRF). Placement records and even average salary packages vary widely.

National Institute of Technology (NIT) Tiruchirappalli in Tamil Nadu, the top-ranked NIT on the National Institutional Ranking Framework (NIRF), has placed an average of 71% of its graduating BTech students in jobs over the past five years. NIT Rourkela in Odisha, ranked third, has done better with job drives, placing 90 percent of their students over the same five years.

The NITs are Institutes of National Importance and, run by the central government, are highly regarded among public engineering colleges. NIT Tiruchirappalli has ranked at the top among all NITs since the NIRF rankings began in 2016. In 2020, NIT Karnataka replaced Rourkela as the second-best NITs, a position it had held since 2016. NIT Warangal is steady as the fourth-highest ranked NIT. In NIRF 2017 and 2018, NIT Calicut was at rank 44 and 50. After 2018, NIT Calicut constantly improved its position, becoming one of the top five NITs for the last three years.

Therefore, NIT Tiruchirappalli, Karnataka, Rourkela, Warangal and Calicut are the top five NITs across the country and were selected for this analysis because they have remained in the top five for the last three years. Also, all five have always been among the top 50 engineering institutes since the ranking started.

On the other hand, NIT Tiruchirappalli held the first rank among all the NITs across the country in all the NIRF rankings but has had the lowest students placements percentage of the top five over the past three years in a row. In 2017 it had placed 72.43 percent of students who had signed up for jobs but in 2021, it dropped to 69.24 percent. However, the sharpest drop in placements over the five-year period was at NIT Rourkela where the percentage of students placed plummeted over 20 percentage points.

The placement percentage of all these top NITs was calculated on the basis of the number of placed students and the students who graduated in the minimum stipulated time. Some of those from the graduating batch of BTechs who were not placed could have gone for higher studies. 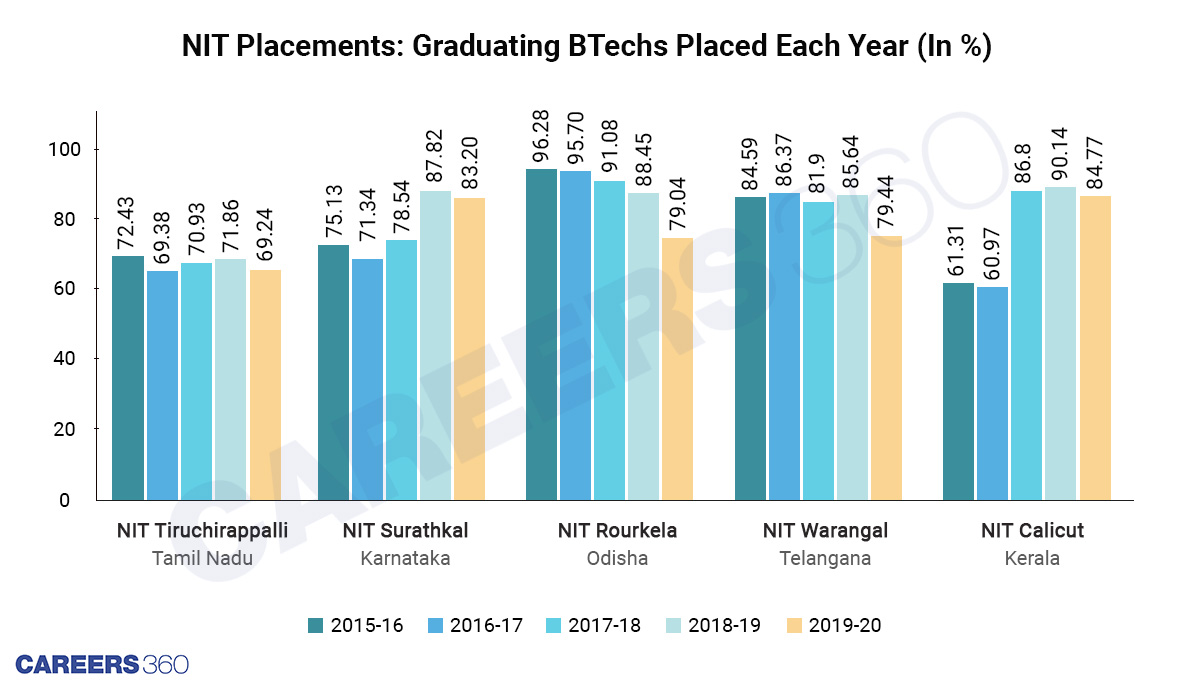 Tiruchirappalli, Warangal, Karnataka and Calicut all showed a steady increase in their median salaries from 2017 to 2021. But for NIT Rourkela, the median salary in 2015-16 and 2019-20 are practically the same. It saw a dip in the median salary in 2016-17 after which it took four years to reach the same milestone. NIT Warangal saw a similar dip the same year as Rourkela but recovered much faster, achieving the maximum median salary for 2017-18. The chart below shows how salaries have risen or fallen at each of the five NITs over the five years.

More than 20 percent of NIT Tiruchirappalli students opt for higher studies while that figure for the other NITs in this analysis is 10 percent.