The concept of compounding does not apply just to investments and compound interest calculators for loans  but also to a range of other phenomena as well, including the spread of viruses like the Coronavirus. Based on the National Council of Educational Research and Training’s (NCERT) Maths curriculum for Class 8 and above, Careers360 explains the fundamentals of  compounding.

The concept of compounding does not apply just to investments and compound interest calculators for loans  but also to a range of other phenomena as well, including the spread of viruses like the Coronavirus. Based on the National Council of Educational Research and Training’s (NCERT) Maths curriculum for Class 8 and above, Careers360 explains the fundamentals of  compounding.

Do you know what the great scientist Albert Einstein considered the eighth wonder of the world? It wasn’t any monument but ‘Compound Interest’. Let’s look at what compounding is in Maths and what its applications are.

Let us first understand what compounding is with the help of compound interest, the form most familiar to us. If you lend Rs 100 to a person for a period of 3 years at 10 % per annum compound interest, the Rs 100 you lent, is called the ‘Principal’. After the first year, the interest will be 10% of 100, which is Rs 10.

Now comes the interesting part. As he will repay you all the money only after 3 years, this interest is added to the principal amount, to calculate the interest for the second year. So, the new principal is

The interest he will pay for the second year is 10 % of the new principal — Rs 110 — which is Rs 11, Re 1 more than the interest earned for the previous year.

For the third year, the new principal will be the addition of the old principal and the new interest — Rs 110 + Rs 11.

While that may not look like much, consider that the amount lent is rarely as small as Rs 100. Individuals may loan — or deposit in banks — thousands or lakhs of rupees while for companies and governments, it may run into crores. The interests earned on these amounts will be very large as well.

Second, the time period is also a factor. Take the same Rs 100. If it is lent for, say, 20 years, then the amount the person will have to repay you will be Rs 673 — more than 6 times the loan itself.

There is another type of interest called ‘Simple Interest’.

Let’s work with the same example: you lent Rs 100 to a person for a period of 3 years at 10 % simple interest. In this case, the interest for the first year will be 10% of Rs 100, which is Rs 10. Now, in simple interest, things remain ‘simple’ and the principal remains the same, Rs 100 for the entire duration of the loan.

So, the interest for the second and third years will be 10% of Rs 100 for each year, or Rs 10 and Rs 10. At the end of 3 years, the person will return Rs 130, including Rs 30 as total interest. This is lower than the amount earned from the loan through compound interest.

This gap between the final amounts payable following simple and compound interest keeps growing if the time periods involved are higher, as the following graph shows: 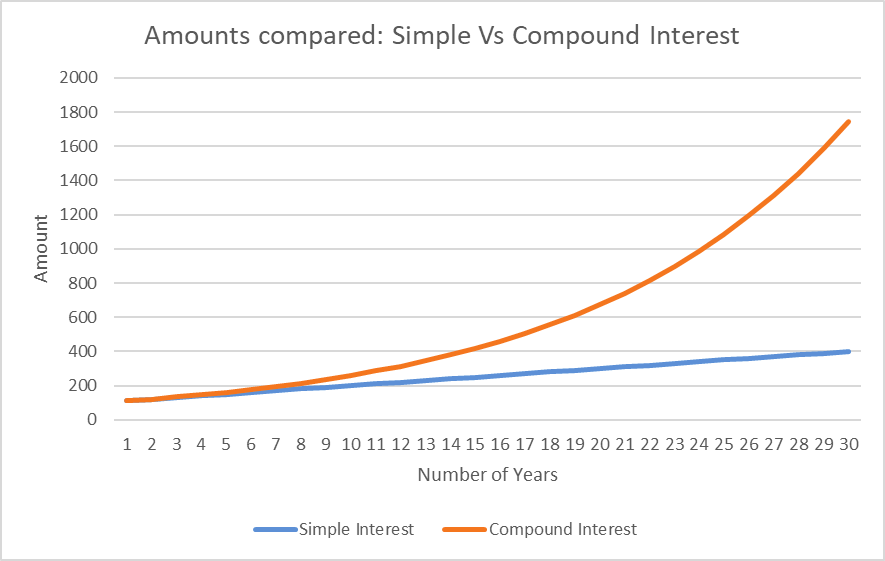 Now, compound interest also depends on the period of compounding. In simple terms the ‘Period of Compounding’ is the time after which interest accumulated is added to the principal.

Using the same example of the Rs 100 loan given at a 10% interest, let us now assume that it was given for 2 years but that the interest was compounded half-yearly. This means that the interest will be added to the principal to form the new principal every six months instead of every year. Here is how it is calculated:

While banking is certainly the domain where the mathematical concept of compounding is most familiar, it finds application in many fields, including epidemiology, or the study of the spread of diseases such as the coronavirus and COVID-19.

If microbes are allowed to grow freely with enough food and nutrients, then in every cycle — say, 1 hour — their number increases by a fixed percentage of the already existing number.

That means if there are 1,000 microbes already present, and the rate of increase is 1% per hour, then in 1 hour, they will increase by 1% of 1,000, which is 10. The new number after 1 hour will be 1,010. In the second hour, new microbes that will come to life will be 1% of 1,010. And this number keeps on increasing with time. Scary, right? But microbes can encounter food shortages, immune systems, medicines, and vaccines, all of which affect their numbers.

Using compound interest, we can tell how much time it will take a quantity — loan, investment or number of microbes — will be doubled. For that, we have to make lengthy calculations involving the use of logarithms.

To make these calculations simple, we have “Rule of 72”, which gives us a rough estimate of the time in which a quantity will double.

If you are the borrower, then compounding will work against you. And if you take a loan with a high interest rate, then the interest itself becomes a huge burden.

For example, credit cards usually carry an interest rate in the range of 20% to 40%. Assuming the rate of 36%, your loan will double itself in just 2 years, following the Rule of 72. If you are not financially disciplined and fail to repay this debt on time, the interest rockets fast.

Now, let us compare two cases where the rates of growth are different.

Consider the investments made by Ramesh, Mukesh, and Yogesh. Ramesh invests Rs 1,00,000 — Rs 1 lakh — in instruments which grow at the rate of 5% per annum; Mukesh and Yogesh invest the same amount at the rate of 7% and 9% per annum respectively. Although, these rates do not differ by much, let us see what their investments will grow to with time through the following chart. 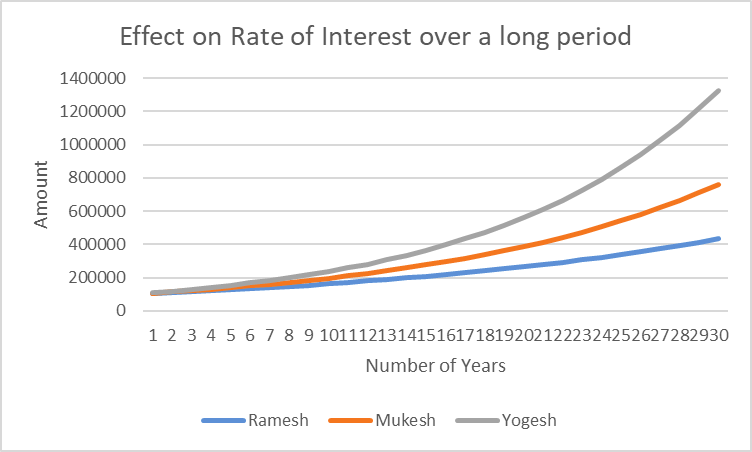 rate of interest over a long period

Ramesh’s investment will grow to about Rs 4,30,000 (Rs 4.3 lakh) in 30 years; Mukesh will have roughly Rs 7,60,000 (Rs 7.6 lakh); and Yogesh will have Rs 13,00,000 (Rs 13 lakh), around three times Ramesh’s amount. This shows that even very small differences in rates will lead to huge differences in actual amounts if enough time is given for compounding to show its effects. This also tells us that starting to invest early is a good idea.

Now, as our last example, let us understand how your studies may be affected by compounding.

As the concepts in your syllabus are interlinked, the more concepts you learn, the easier it becomes to grasp newer ones. We can assume that learning compounds itself.

Assuming your knowledge is 100 ‘units’ now, if it increases by just 1% every day, by the end of the year — 365 days — this is how many ‘units’ of knowledge you will possess:

If you increase your knowledge by 2% every day, it will be

This is 36 times 3,778. So, as a student, you have to put in your best effort, as even a slight difference in it will lead to a huge difference in result.

Why And How To Document Your Internship

Methods Of Preparation of Aldehydes, NEET Questions And Solutions