Over the years, there has been an increase in cases of bullying all across the globe. It’s shocking to realise that several children and adolescents have at least once in their lifetime experienced an instance where they were ridiculed and harassed by their peers. This is extremely common in schools and colleges, and therefore, it is advised that parents watch out for the red flags, stepping in with timely guidance and help, whenever needed.

Bullying is typically repetitive in nature, and perpetrated by someone who imposes authority and power over the other who is submissive and a victim. It is not a one-time act. It is purposeful behaviour that involves an imbalance of power and strength.

The victim in such situations, often finds themselves defenceless, due to the disparity of power. The target often also gets intimidated because of the presence of other bullies, along with the main bully. Unfortunately, the experience of being bullied can lead to long term emotional, physical, and social effects on the victims, which is why it is something all parents and caregivers must be cautious about.

To be able to understand what to do when your child is being bullied at school and help out children and adolescents in bullying situations, it’s important to understand that it takes place in several forms, such as the following-

When physical actions are used to intimidate or gain control over a child or adolescent, with an intention to harm and damage the victim's body or belongings through kicking, hitting, slapping, pushing, pinching, etc. This creates a possibility of deep emotional damage and scarring.

Sometimes, hurtful words cause deeper psychological harm than physical bullying. It includes teasing, name-calling, sexual comments, taunts and threats. The purpose is to degrade and demean the target in order to feel dominant and powerful.

It is when a bully tries to get what is needed by making others feel angry or afraid, often by using sarcasm, belittling, hazing, tormenting or excluding them from the group. The bully might appear to be pulling off pranks, but actually, these might be attempts to humiliate the target.

It is when a target is belittled, mocked or shamed because of their physical appearance, ethnic background, religious practices, cultural background or for the way someone talks and dresses.

It takes place over digital devices like mobiles or computers, through emails, texts and social media applications where people can view, participate and share content with each other. With an intent to harm the target's reputation or embarrass them, the bully posts negative, harmful and false content. Bullying online is the most persistent of all and children find it difficult to find relief.

Children who suffer are mostly reluctant to report, share or tell about what is going on to parents or authorities due to many valid reasons, the first being the fear of retaliation by the bully. They may experience a harsh backlash and a humiliating experience which they might want to avoid by keeping things to themselves. Secondly, they might feel ashamed and powerless and feel that they are not able to help themselves. A child might want to handle the situation on their own to gain back the lost control. They may fear being seen as weak. Thirdly, children or adolescents who are bullied may feel socially isolated. They may feel like no one cares for them and no one understands their situation.

As a parent, you should know what to do if your child is being bullied online, at school, or in college. Parents have to be perceptive of warning signs and changes in their ward’s behaviour and actions. Also, parents of children with special needs are required to be even more attentive, as children with disabilities may be at a higher risk of being bullied than other children.

Children or adolescents who experience bullying might have some unexplained bruising, cuts or scratches which may be because of a physical attack, or because of self-harming tendencies arising due to getting bullied. They may come home from school/college with damaged belongings, torn clothes, or with missing things. They may stammer or hide the truth if asked for a reason for the same.

Targets may internalise the stress of being bullied so much so that it may show up as psychosomatic symptoms such as vomiting, stomach problems or breathing issues. Their emotional thresholds may get lowered and they may withdraw themselves from social gatherings, or speak less than usual. They may also manifest changes in sleeping and eating patterns. As a result of continuous humiliation and helplessness, they may also lose interest in studies, and their academic grades may begin to fall. Sometimes, children also lose interest in their hobbies and other favourite things because of continuous preoccupation with negative thoughts.

Children and adolescents who are victims of bullying may experience mood swings, such as frequent crying, or getting angry easily. They may seem to become unreasonable, and externalise the stress they have inside by targeting their younger friends or siblings who have less power than them. They may frequently lie about things and refuse to talk about what is wrong. These children may exhibit reluctance to go to school/college in order to avoid stress. They may get frightened or insecure at school/college, which might lead to loneliness, or exclusion from groups.

If your child displays any of the above-mentioned signs, consider it as a red flag. Being perceptive and having insight about the physical, socio-emotional and behavioural battles a child/adolescent is fighting alone is the stepping stone to begin to do something about it.

It’s important that parents first establish a connection and an empathetic relationship with their children. Children or adolescents would only open up with elders about the ongoing issues in their life when they would feel that they are being understood, and not being judged for anything. If your child is showing any of the above-mentioned signs, they could indicate some other form of abuse as well. Hence, consider patiently speaking to your child, and also to the school/college authorities to understand the situation better.

Speaking To Your Child About Bullying 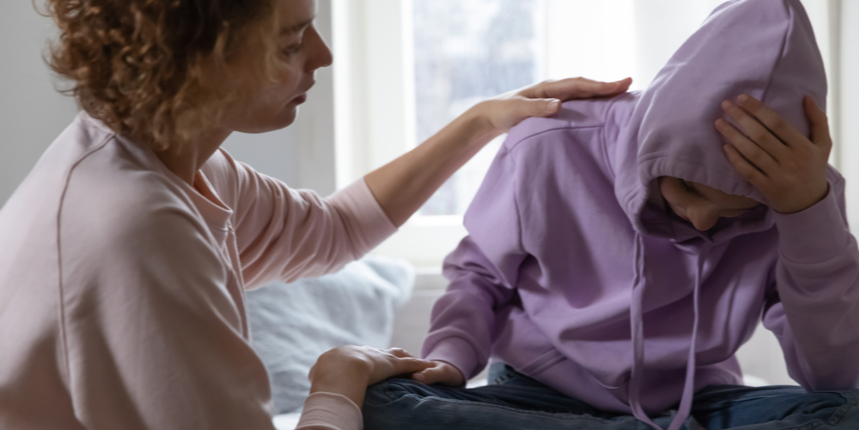 Help Your Child Deal With Bullying

Bullying is one of the menaces in the society that continues to exist, despite multiple steps having been taken by the government to curb it. As a parent, you can only gain from knowing what to do if your child is being bullied at school. Bullying can be controlled, and eventually eradicated only with the conscious efforts of parents to sensitise children about the possible harms bullying can do and strengthen them enough to take an assertive stand if they ever happen to become a victim to bullying, and those of authorities at educational institutions to ensure that this peril does not interfere with the lives of their students.

Priyanka Bakshi is a child psychologist accredited by the Rehabilitation Council Of India (RCI). She holds extensive experience in helping children, adolescents, and their parents work towards socio-emotional wellness, and heads the Child Guidance And Counselling vertical at Daffodils Therapy Studio, New Delhi.

Know All About The eLitmus pH Test For Placements: Pattern, Eligibility, Syllabus and Fee

Getting a well-paid job in an established company is the dream of many fresh graduates in India. There are various off-campus recruitment drives which help graduates get an entry-level job. The pH exam conducted by eLitmus, is one such examination which is a good opportunity one can explore. In the article below, we have discussed various aspects of the pH exam which include eligibility, pattern, syllabus, and much more.

How Can Parents Help Their Teenage Child With Anxiety And Depression?

This Is How Cornell Note Taking Method Will Help You