The top 10 engineering colleges in Uttar Pradesh together placed 69 percent of their BTech graduates in jobs, data from the latest government ranking, NIRF 2021, shows. How did each college, including IIT Kanpur and IIT BHU, do individually with placing students in engineering jobs  and in comparison to colleges in other states?

The top 10 engineering colleges in Uttar Pradesh together placed 69 percent of their BTech graduates in jobs, data from the latest government ranking, NIRF 2021, shows. How did each college, including IIT Kanpur and IIT BHU, do individually with placing students in engineering jobs  and in comparison to colleges in other states?

Uttar Pradesh’s best engineering colleges together placed 66.53 percent of the BTech students who were enrolled from 2016 to 2020, the latest data shows. For the top 10, the placement rate was better, close to 70 percent.

For 2021, the ministry of education’s National Institutional Ranking Framework ranked 200 engineering institutions from across the country. Of these institutions, 14 were engineering colleges in Uttar Pradesh (UP). However, only five were in the top 50 colleges ranked in NIRF 2021 and only one in the top 10 – Indian Institute of Technology (IIT) Kanpur. Although a national institution, it has been included in the state-wise analysis of placement data.

Careers360 analyzed the data on the total number of seats – or, intake – enrollment, graduating students, and the placement, shared with NIRF for the latest ranking exercise, to understand how the batch graduating in 2020 did with BTech placements.

Given below are the top engineering colleges of UP which were ranked among the top 200 in India as per the NIRF.

UP’s top 10 colleges together placed 68.6 percent of its graduates in 2019-20, beating the top colleges of Karnataka, Telangana and Tamil Nadu who placed around 65-66 percent of their BTech students. Maharashtra’s best colleges had the best average placement rate – 80 percent – while Andhra Pradesh had the lowest, 52 percent. These averages are based on the total number of students graduating and not the total enrollment. 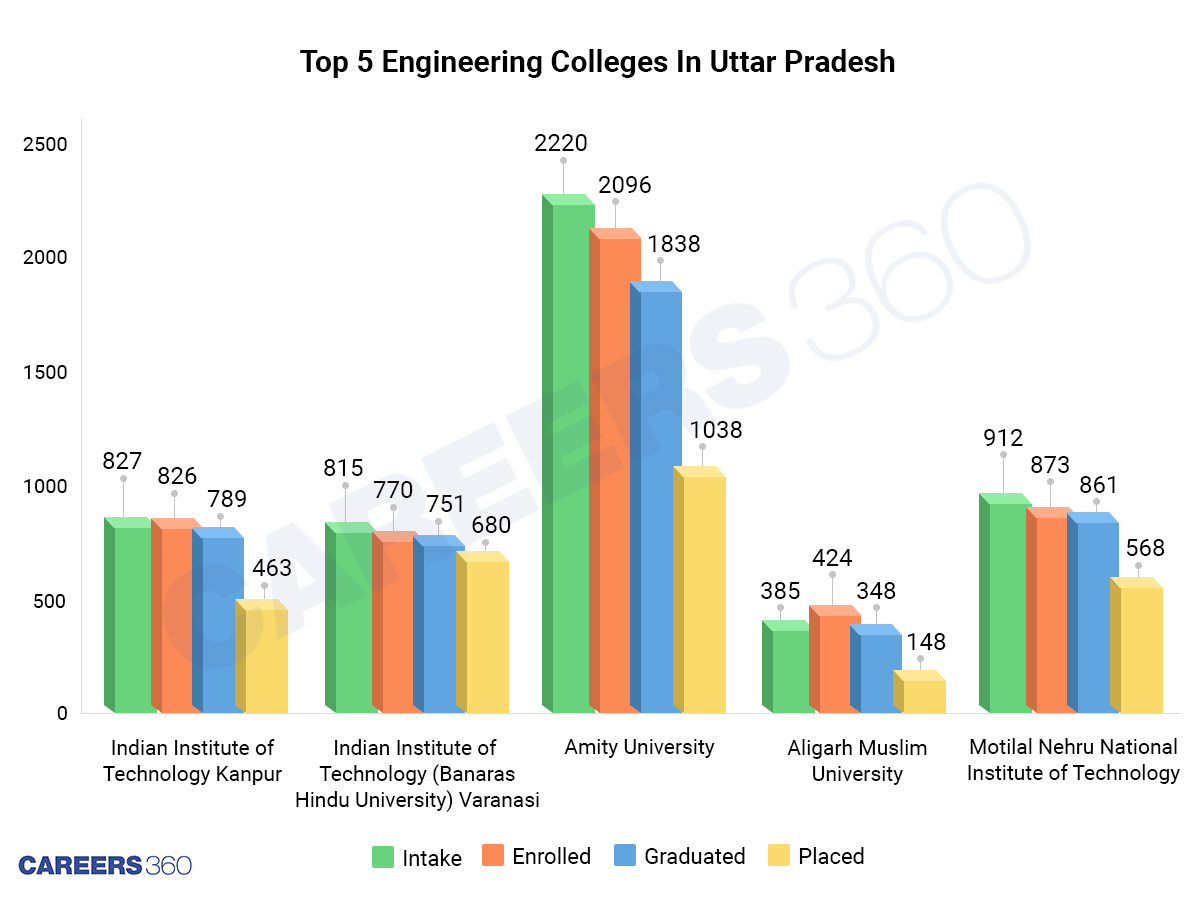 The latest NIRF ranking utilises data from 2020 when the COVID-19 pandemic was first spreading through India. The management of the pandemic impacted the economy and livelihoods deeply and, in turn, they affected recruitment across campuses. UP’s appreciable performance in comparison to other states despite this situation could also be attributed to the fact that four out of the top five institutions are national institutions – IIT Kanpur, IIT-BHU, AMU and MNNIT Allahabad are all nationally-funded and run.

BTech In Uttar Pradesh In Numbers

About 17.5 percent of the BTechs to graduate in 2020 from UP colleges opted for higher studies.

Institutions such as IIT Kanpur, AMU, Motilal Nehru NIT and Rajiv Gandhi Institute of Petroleum Technology had a higher percentage of students who opted for higher studies than the average of the top 10 colleges. At IIT Kanpur, it was 41.2 percent, the highest and at MNNIT, 32.8.