What is the composition of the student community at the top National Institutes of Technology (NIT)? Are there many women students in BTech and is their number growing? An analysis of data shared with NIRF for ranking shows how various groups – women,  Economically Weaker Sections (EWS), Scheduled Castes (SC), Scheduled Tribes (ST), Other Backward Classes (OBC), students from other states and international students – are represented in the student population of the top NITs – NIT Trichy, Surathkal, Rourkela, Warangal and Calicut.

What is the composition of the student community at the top National Institutes of Technology (NIT)? Are there many women students in BTech and is their number growing? An analysis of data shared with NIRF for ranking shows how various groups – women,  Economically Weaker Sections (EWS), Scheduled Castes (SC), Scheduled Tribes (ST), Other Backward Classes (OBC), students from other states and international students – are represented in the student population of the top NITs – NIT Trichy, Surathkal, Rourkela, Warangal and Calicut.

Over five years, the top National Institutes of Technology (NIT) has shown a decreasing trend in the percent of female students enrolled for engineering, an analysis of the latest data shows. The average percentage of female students enrolled in the top five NITs was around 21.5 percent in 2015-16. That reduced to 19.5 percent over the next five years.

NIT Tiruchirappalli (or NIT Trichy), Tamil Nadu, always the top-ranking college in the National Institutional Ranking Framework (NIRF) engineering rankings, has been admitting fewer women over time. Data on enrollment shared for ranking is made public at the time the lists are released. Careers360 analysed that data for the NITs to understand the composition of their student communities. The latest ranking, NIRF 2021, considered data for the batch that was enrolled in the four-year BTech programme from 2016 to 2020. That is the latest data publicly available.

As centrally-run public institutions, the NITs are subject to the central reservation policy. This means that most of them are unlikely to be homogenous and will have representation from historically-marginalised communities such as the Scheduled Castes (SC, 15 percent reservation), Scheduled Tribes (ST, 7.5 percent) and Other Backward Classes (OBC, 27 percent) and within these, for persons with disabilities (PWD). Seats are reserved also for the upper-caste poor or Economically Weaker Sections (EWS, 10 percent). Seats at an NIT are also split halfway between the centre and the state where it is located. This means that 50 percent of seats are reserved for students from within the state and the rest are for students from across the country.

The lopsided male-female ratio among engineering students was expected. What was not was the declining presence of women students over years.

In five years, the number and percentage of female students decreased in NIT Trichy, Surathkal and Calicut. At NIT Rourkela and Warangal, their absolute numbers have been rising but their percentage dropped meaning, the representation of women in relation to men declined.

Unlike the NITs, the new-generation Indian Institutes of Technology (IIT) showed an increasing percentage of female students over the same period. However, the IITs had decided to add supernumerary seats for women in 2017. 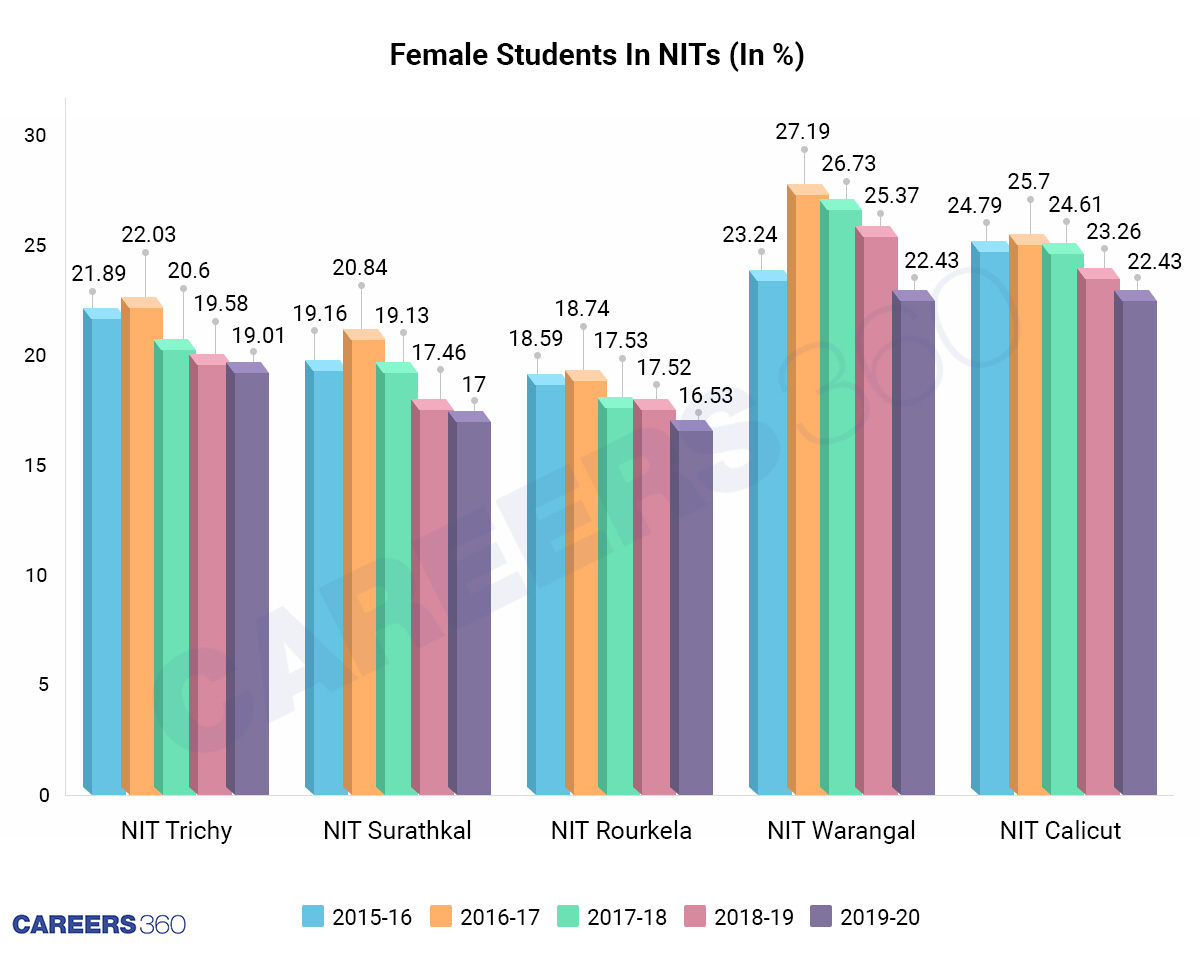 Also Read | Rank Below 2 Lakh In JEE Main? List Of NITs Where You Could Get A Seat

Diversity: In, Out Of State

Given the reservation pattern of the NITs, a large section of students come from the state where a particular NIT is located. However, the average does not reach 50 percent despite the presence of a quota. On average, around 44 percent of students are native to the state where the college is located, the “home state”.

By comparison, regional diversity varies widely in the “second generation” IITs – from 1.6 percent students from within the state to 40 percent as per NIRF 2021 data – but they do not have any home state quota.

Ten percent of seats are reserved for General Economically Weaker Sections (GEN-EWS) in the NITs. In this case, the NIRF data throws up more questions than it answers. The EWS quota was introduced in 2019 and, therefore, would reflect in only one batch’s data in 2019-2020.

Although the matter is now sub-judice in the Supreme Court, the EWS quota is for the upper caste students whose annual family income is under Rs 8 lakh.

What is not clear is how the NIRF or the NITs defined “EWS” before the definition was standardised in 2019. The NITs collect income data at the point of admission but there are impossible variations from year to year. The entries against NIT Surathkal are a case-in-point. The data suggests that the representation of EWS students rose by over 15 percentage points from 2015-16 to 2016-17 and then dropped by 16 percentage points the next year. Considering that drastic changes occur only when one batch graduates and another batch joins and that a single batch’s composition is unlikely to undergo much change over the four years a BTech programme lasts, these figures seem impossible. The table below shows the percentages drawn from NIRF data.

EWS Students In NITs (In %)

For SC, ST and OBC students, reservation is by central policy and the quotas add up to 49.5 percent of total seats. There may be variations depending on the location of the NIT but those are not visible in the top ranks. It is clear from the figures in the table below that several NITs do not have a 49.5 percent representation of these groups. NIT Calicut has been the exception and NIT Rourkela has come close. Data was not furnished separate for each of the groups.

On average, the presence of foreign students in the total strength enrolled in these NITs has decreased from 9.36 percent to 5.34 percent over the five years.

Though NIT Warangal and Calicut did not show major changes in the number of foreign students, NIT Trichy and Surathkal now have 25 percent and just ten percent of the foreign students they had in 2015-16 respectively.

International Students In NITs (In %)