Career in Defence after Engineering

Career in Defence after Engineering - A career in defence services is considered one of the most respected and prestigious careers in India. Each year lakhs of aspirants give various entrance examinations in order to get selected in the defence services. There are a number of ways through which the aspirants can join the Indian Armed Forces. In this article, we are going to focus on how an engineering student can join the defence services as an officer. We are also going to discuss how to build a career in defence after engineering. 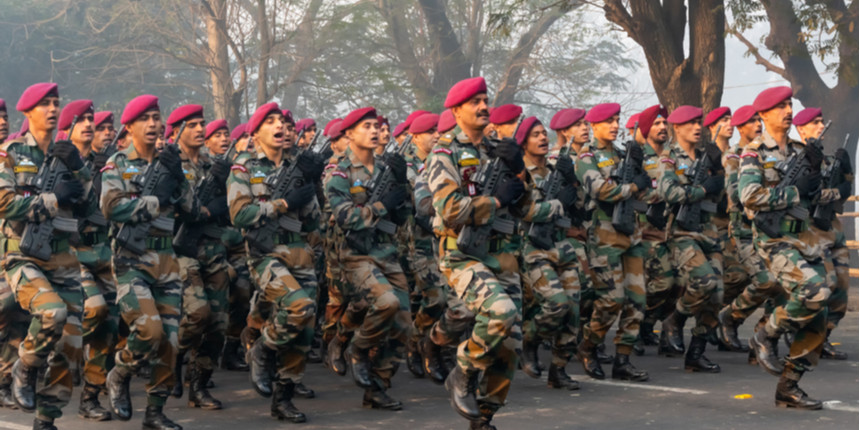 Overview: Career in Defence after Engineering

The various procedures in place that help engineering students after the successful completion of a bachelor’s or master’s degree are mentioned below:

The stages to be cleared in the examination are written exam and Service Selection Board Interview. The mode of the examination is in the offline mode (pen and paper-based) and the language of the paper is English and Hindi. The examination for permanent commission includes three papers English, General knowledge and Elementary Mathematics and the duration for each paper is two hours. For the Short Service Commission in the Indian Army, only English and General Knowledge are required.

Technical Graduate Course entry also known as TGC entry is a type of entry by which an engineering student(only male) can join Indian Army as an officer. This is an entry scheme specifically meant for those students who are looking to have a career in defence after engineering.These students can start applying for it in their final year. This course commences at Indian Military Academy and the notification is circulated by Additional Directorate General Recruiting/AG branch. The age limit for this entry is 20-27 years with B.E. / B. Tech final or appearing degree. The candidates selected from this entry are deployed in the technical team of the Indian Army. The training period for this is one year, unlike the others which are 1.5 years.

University Entry Scheme is an entry scheme through which a student pursuing engineering(last year) is eligible for this type of entry. The term for this service is 10-15 years during which a candidate can apply for Permanent Commission(PC). The eligibility criteria include the candidate should be unmarried fulfilling the eligibility condition of Nationality as laid down by the Government of India. The candidate must have a minimum of 60 per cent aggregate marks from a recognised university.

Air Force Common Admission Test is an entrance exam held by Indian airforce with the help of the Centre for Development of Advanced Computing (C-DAC). This exam comprises two parts, first is the Air Force Common Admission Test and the second is Engineering Knowledge Test (EKT only for technical). The mode of examination for both the exams is a computer-based test(CBT). The duration of AFCAT is 120 minutes and that of EKT is 45 minutes. After successful completion of the exam, a candidate is selected at an officer grade.

Candidates who have cleared M.A/M.Sc degree with 1st or 2nd division is only eligible to get admission into this programme. The students awaiting their final results are not eligible for the programme offered by the Indian Army. The selected candidates receive the rank of lieutenant on probation under short service commission. The duration of this training is one year comprising the knowledge of both combat and non-combat operations.

Permanent Commission means a career in the Indian Army till retirement. A candidate who gets selected under the permanent commission has the opportunity to serve the country till the age of 60.

Short Service Commission (SSC) means a limited period of a career in Indian Army which candidates can join by opting for a SSC course through AFCAT/MET entry/NCC special entry. The mode of this exam is offline(written exam) which is conducted twice in a year in the month of September and February. After successful completion of the exam, a candidate needs to go through a personal interview round which is conducted by the Service Selection Board(SSB). A successful candidate receives a post at officer grade and the service tenure is 10-15 years.

The information on entrance examinations and the training academies in which the cadets join has been provided in this article. Once the cadets pass out from these academies, they join as officers in Indian Armed forces. This article will help those who are planning to build their career in defence after engineering.

Question: What happens in IMA Dehradun?

Question: Can a person join the Indian Navy if he/she doesn’t know how to swim?