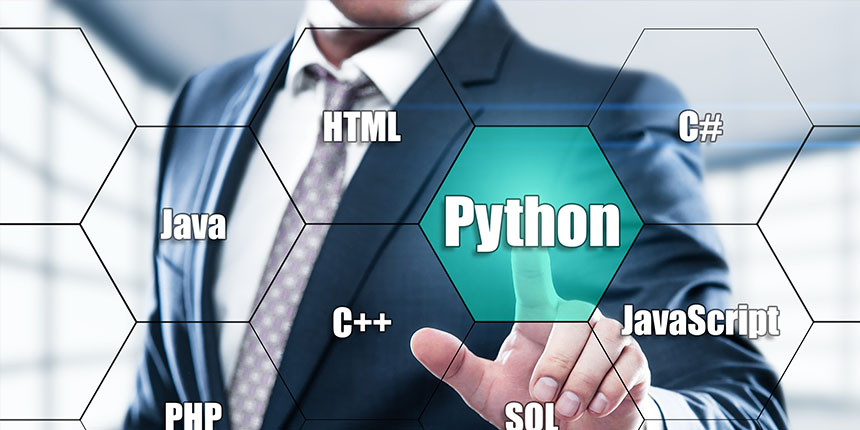 Know about Python programming- As is with any new language, an understanding of Python basics will keep you in good stead. Python programming for beginners is a ubiquitous programming language, which was developed in the early 1990s. Python programming focuses on easing the syntax by allowing the code to fit in fewer lines. Thus, working with this language is a breeze. There are two Python versions: Python 2 and Python 3. The standout features of the Python code are that it is a high-level, interactive, and object-oriented language. Python language is designed to be highly readable. It uses generic English words as compared to the use of punctuations by other languages. Moreover, the Python programming tutorial indicates fewer syntactic constructions.

A Python developer is expected to:

Python programmers remain in demand across a wide array of companies. Learn Python today, and in due course, you could have your foot in the door as a Python developer at Zomato and MakeMyTrip, to name a few firms.

2. Product Manager - Product managers are essentially the CEO of their products. Typically, they have a functionally diverse team working on exploring novel user experiences, conducting extensive primary research to find supply-demand gaps, thereby making a case for new product development. Of late, Python programming tutorials are garnering interest from the management owing to the ever-increasing role of data for organizational decisions. The Python language adds value to a Product Manager’s work portfolio by saving reporting and analysis time. This makes you a little less dependent on your data-science team while accessing the analytics data yourself. If you’re looking for a career that requires talking with users and crunching data, becoming a product manager will be a good choice. Sprinklr and Uber are just a few companies hiring Product Managers with Python certification.

3. Data Analyst - If the idea of finding meaning in large amounts of data appeals to you, a career as a Data Analyst should be looked into. Many Management Consulting firms have a dedicated organizational structure devoted to Data Science. You will be expected to sift through large sets of data — and a popular way to accomplish that is using Python libraries such as Pandas and SciPy. Python programming unlocks great synergies when applied to machine learning, so it’s no surprise organizations like McKinsey and Deloitte are looking for Data Analysts with Python experience on their resumes.

4. Educator- Establishing one’s own Python programming tutorial Point in the digital space could be a profitable venture, given the language’s growing interest among budding professionals. Thus, learning Python from the beginning would attract teaching roles in colleges and universities.

5. Financial Advisors - In just the past 2 years, banking businesses have begun investing resources to train their banking associates to learn Python. The rationale is the versatility of the Python programming language which can lead to better revenue figures for the bank.

Following suite, Business schools have responded by incorporating Python programming tutorials to their MBA students. From initial feedback, a significant quantum of Finance students are taking a liking to learning Python.

6. Data Journalist - When journalism is aided by strong statistical evidence, it creates a whole new paradigm shift to the stories being narrated. This is a specialty within journalism that uses data to articulate stories. Like in other job roles, journalists with a stronghold of Python basics are in demand because of their ability to rapidly sort through information. Tables, graphics, and other aided infographics lend a strong visualization element to the news.

How you build the logic with the syntax in place is more important than what you build. The journey of creating is truly what will enlighten you the most. You can only grasp a limited amount from reading Python courses. Most of your learning will come from putting Python to use. Problem-solving will be an effective coach while giving you a real sense of accomplishment. There are many Python projects suitable for beginners. Here are some ideas:

Question: How difficult is it to learn Python?

Python video tutorials are an effective way to learn the language. Anyone can understand Python easily, and usually, its code is much more concise as compared to other languages.

Question: Can Python be learned without programming experience?

Python Programming is simply based on logic. If you have a great sense of logic, you can start with any language, along with .Net, Java, C++ to name a few. When it comes to code readability, PYTHON is one of the easiest languages as it utilizes fewer lines of code. You can easily start on the pretext of basic know-how of English and mathematics.

Question: Can Python be learned for free?

Yes, the following 5 sources are free and reliable:

Question: How long does it take to master Python Programming?

You will need approximately 8 weeks on average to master python programming. However, time also depends on the basic programming language that you know and the amount of time you devote to learning the language.

Question: Can I get better job opportunities after learning Python Programming?

Getting a certification in Python programming is worth your time and efforts if you want to surge ahead in your career. Completing the course will open doors to better job opportunities and high salaries as you will have expertise in machine learning, data visualisation, and analysis.

Question: How difficult is Python Programming?

The programming language is quite easy to learn. The code is easily readable as well as the syntax is quite easy.

Yes, you can opt for a free Python course by Microsoft. In addition, there is also a free course on Edx that you can pursue.

Python is becoming very popular every day in the IT field. Rea...

Best Features Of Python: Why Learn Python For Programming?

Learn about the top 10 crucial features of Python. Discover th...

The article discusses in brief the popular interview questions...

Palindrome in Python: How to check a number is a palindrome?

Here’s everything you need to know about the process of identi...

Explore top Python Applications in the Real-World to become a ...

04 May 2022
Read More
View All News and Articles
Have a question related to Python ? Ask

Cost of studying and living in Chennai

10 Online Courses to Get High Salary Job After MCA

PMKVY: An Analysis Of Training Programmes In Central India

Your Python brochure has been successfully mailed to your registered email id .