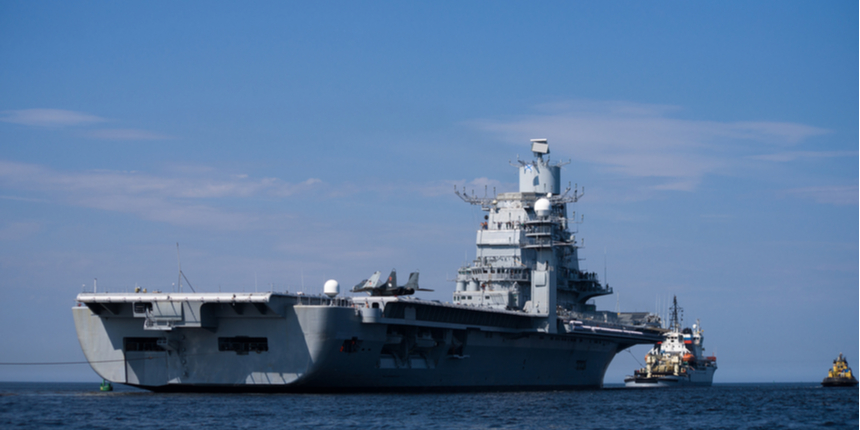 The Indian Navy is not merely a job but a way of life. The service pushes you to be your best version by giving you ample opportunities to explore your potential in every sphere of life from education to music to adventure sports. It is a heavily technology-driven force equipped with state-of-the-art technologies and warfare. Moreover, through the Indian Navy you also get to explore the world as the ships and submarines keep visiting foreign ports quite often.

Now, you might be having certain questions in your mind surrounding how to join Navy after 12th. Don’t you worry! Through the article, we shall help you explore the different ways of how to go in navy after 12th

How to join the Indian Navy after 12th

Let us now understand the different ways of how to go in navy after 12th in more detail.

How to join the Indian Navy after 12th - As an Officer

As an Officer in the Indian Navy you are certain to carve an illustrious career for yourself and make your loved ones and country proud. You will have the opportunity to choose a branch of your liking that also compliments your educational background.

The five main branches in the Indian Navy are Executive, Engineering, Electrical, Education and Medicine. Each branch has its own exciting prospects, like the Executive branch has posts in Hydro Service, Information Technology, Air Traffic Control, Naval Aviation, Logistics, Law etc; Engineering branch consists of Naval Architecture, Marine Operations, Metallurgy and many more

Educational requirements: For answers to how can I join Indian Navy after 12 at technical posts, you must have Science in class 12, with Physics & Mathematics and English as mandatory subjects. Several specialisations like Naval Aviation (Pilot), Education, Law among others also require a Bachelor’s degree in the relevant discipline as a minimum requirement.

Selection Procedure: Entry into the Indian Navy is mostly through entrance exams like NDA/ NDA (Naval Academy) after class 12 or CDSE/ INET/ NCC entry after graduation. However, there is a provision of direct entry as well after class 12, namely (10+2) B.Tech Direct Entry which requires a minimum 70% in 10+2 PCM and JEE (Mains) rank. The selection process also has mandatory SSB Interview as the 2nd stage followed by Physical Efficiency Tests and Medical Examination.

Training Centre: All the candidates selected for the post of Officers have to undergo Naval Orientation Course at the Indian Naval Academy situated in Ezhimala, Kerala and professional training at various Naval Training Units or Ships.

Continue reading the article to know more about how to go in navy after 12th.

How to join Indian Navy after 12th - As a Sailor

If you wish to know how can I join Indian Navy after 12 directly, without pursuing any graduation or appearing for entrance exams like NDA/ NDA (NA)/ CDSE/ INET, that is also very much welcomed by the Indian Navy. You can join in the capacity of a Sailor as an Artificer Apprentice (AA)/ Senior Secondary Recruit (SSR)/ Matric Recruit (Chef/ Steward/ Sanitary Hygienist)/ Musician.

Educational requirements: You should have passed class 10 and/or 10+2 PCM with a minimum aggregate of 60% for AA and SSR. However, for MR and Musician entry the minimum qualification required is 10th pass and additionally musical aptitude for Musician trade.

Selection Procedure: For the posts of AA, SSR & MR (Chef/ Steward/ Sanitary Hygienist) there will be a written examination. No written examination for Musician trade except for a musical ability test. In addition, PET & medical examination is mandatory for recruitment in all posts.

How to join Indian Navy after 12th for female

If you want to know how to join Indian Navy after 12th for female, the options are limited. There are many excellent prospects for women in the Navy, but they can be availed only after graduation.

Women can be commissioned in the Indian Naval Forces as Short Service Commissioned Officers. Currently, the women are inducted as Navy Officers in various branches/ specializations like Education, Naval Architecture, Pilot, Air Traffic Control, Law to name a few. Also, Permanent Commission has been approved by GOI in Education, Law and Naval Architecture branches depending on merit and vacancy. Hence, options for how to join Indian Navy after 12th for female are limited, but there are many prospects available after graduation.

Benefits of joining the Indian Navy

Those who wish to know how to join Indian Navy after 12th, might also need clarity about the benefits joining the service. Here are a few perks you might enjoy as a member of the Indian Navy.

Allowances- Other than the handsome packages, the recruits are also entitled to several allowances like Travel, House Rent, Sea Duty, Hard Area, and Uniform among many others.

Travel Concessions- Free rail/ air travel once in a year for recruits and their family members as well as travel concessions on other occasions for 5-6 times a year.

Educational/ Industry Training- Indian Navy sponsors the education and training of its most talented recruits in the best Universities across India.

Sports & Adventure Activities- Indian Navy gives immense importance to sports and fitness and that’s why you will find excellent sports facilities and gymnasiums on board ships. They also conduct adventure sports like SkyDiving, Mountaineering, Paragliding, Scuba Diving and many more.

Pension- Pension facility ensures financial security for a lifetime after you have completed a minimum 15 years of service.

The above article gave us a good idea about how to join Navy after 12th. We have seen that for a young and enthusiastic Indian the prospects in the Indian Navy are nothing short of excellent. Not only do you get all the desired benefits and facilities but also get to serve your country and lead a life of dignity since the very first day of recruitment.

Author- The author of this article is Anindita Nandy, who is a Psychologist, with expertise in Career Counselling of high school students.

Question: Can I apply for the Indian Navy after 12th?

Yes definitely! If you want to join as an Officer after 12th you need to have PCM and appear for NDA/ NDA (Naval Academy) or SSB interview through 10+2(B.Tech Entry) direct entry. You can also join as a Sailor after 12th.

Question: Can 12th pass apply for the Indian Navy?

Yes. You apply for the Indian Navy for the post of either an Officer or Sailor.

Question: How do I join the Indian Naval Academy after 12th?

Question: What is Navy MR?