Get answers from students and experts Ask
#Language #Communication
24 Views

Discuss the role of body language in communication.

This includes your posture, your facial expressions, and your hand gestures. The ability to understand and interpret body language will help you pick up on the concerns, problems, or negative feelings that other people might have. You can also use this in a constructive way to add power to your verbal messages.

Body language refers to the nonverbal signals that you use to communicate your feelings and intentions. It includes actions and mannerisms such as:

discuss the role of body language in communication..

Discuss the role of body language in communication

discuss the role of body language in communication in 150 words

discuss the body language in communication

I have completed my engineering in Electronics & Communication in 2017, can i join JNU for MA in korean language ...????? I know little korean language, learned from youtube. please reply Thank you

Consider a sphere of radius R with charge density distributed as

a) Find the electric field at all points r.
(b) Suppose the total charge on the sphere is 2e where e is the electron charge. Where can two protons be embedded such that the force on each of them is zero? Assume that the introduction of the proton does not alter the negative charge distribution.

, each of surface area S are charged to –Q and q, respectively, where

), free to move is located on the other side of the plate with charge q at a distance d (Fig 1.13). The third plate is released and collides with the plate β. Assume the collision is elastic and the time of collision is sufficient to redistribute charge amongst 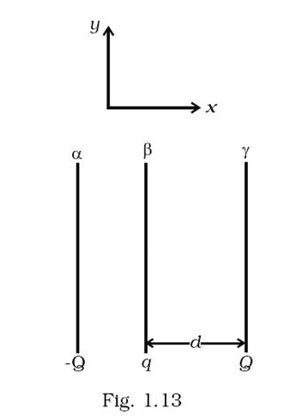 (a) Find the electric field acting on the plate

before the collision.
(b) Find the charges on β and

after the collision.
(c) Find the velocity of the plate

after the collision and at a distance d from the plate β.