The dates are yet to be announced for both NEET and JEE Main admit card release. The admit card for both will be released anytime soon if there is no further postponement of the exams. You need to check the updates and news so that you stay updated. Please lookout out for such important information. Click the links below to know the dates once updated https://medicine.careers360.com/articles/neet-important-dates

The admit card for NEET is expected to be released by NTA tentatively on August 29. Check the news articles on the same by visiting the following link: https://medicine.careers360.com/articles/neet-admit-card/amp

When the dates for JEE Main was announced earlier ut was stated that the admit card would be released 15 days before the examination. Since JEE Main is to conducted from September 1 we can expect the release of admit card within some days.

All this may be further delayed because our education ministry is in dillema whether to conduct these entrance examination or not because of the increasing coronavirus cases.

pls,give me a correct information about the date of release of admit card,and date of Neet 2020 examination?

Your Joint Entrance Examination (Main) brochure has been successfully mailed to your registered email id “”.

The energy dissipiated by a resistor is 10 mJ in 1s when an electric current of 2mA flows through it. The resistance is _______

In a parallel plate capcitor set up, the plate area of capacitor is 2m2 and the plates are separated by 1m. If the space between the plates are filled with a dielectric material of thickness 0.5m and area 2m2 (see fig) the capacities of the set-up will be _____

. (Dielectric constant of material =3.2)  (rounded off to the nearest integer) 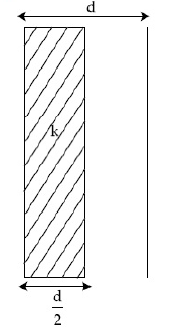 A swimmer can swin with velocity of 12km/h in still water. Water flowing in a river has velocity 6km/h. The direction with respect to the direction of flow of river water he should swim in order to reach the point on the other bank just opposite to his starting point is ____________

For an ideal heat engine,the temperature of the source is

respectively. The compressebility of gases are equal in both the pipes. Both the pipes are vibrating in their first overtone with same frequency. The length of the open pipe is