Learning the topic, Sources Of Energy and understanding its concepts are crucial if you are preparing for JEE Main and NEET (UG). In this article, Careers360 looks at the basic components of the chapter on Sources Of Energy and explains them in a precise manner without using any tough terms. In just one read you will be able to easily understand the basics and remember them during JEE Main and NEET (UG) exam. So, why wait? Read on.

Learning the topic, Sources Of Energy and understanding its concepts are crucial if you are preparing for JEE Main and NEET (UG). In this article, Careers360 looks at the basic components of the chapter on Sources Of Energy and explains them in a precise manner without using any tough terms. In just one read you will be able to easily understand the basics and remember them during JEE Main and NEET (UG) exam. So, why wait? Read on.

Energy is a basic requirement of all industries. It is indeed a major concern for India, the second-largest populated country in the world, after China. More so because India’s population growth rate is high and is estimated to overtake that of China by 2025. With a huge population to feed, India’s energy requirement is also high and it is now the third biggest electricity consumer in the world. So, let us try to understand the various sources of energy in relation to Class 12 exams and entrance exams like Joint Entrance Examination Main (JEE Main) for engineering courses and the National Eligibility cum Entrance Test (NEET-Undergraduate) for MBBS.

Renewable energy resources are those that get replenished in comparatively less time. Major renewable sources of energy are: 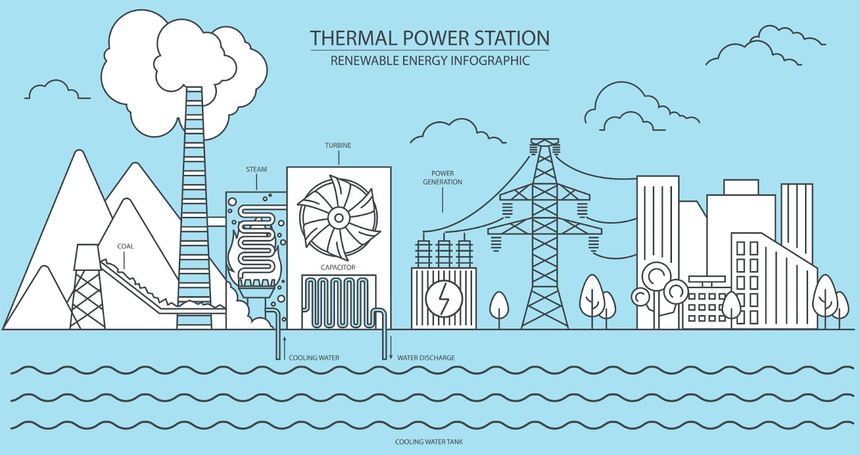 The term thermal power is used to describe the burning of fuel to produce heat energy which gets converted to electrical energy. Usually, thermal power stations use fossil fuels (oil, coal and gas) to boil water to produce steam which drives a turbine to generate electricity. Thermal power plants are set up near sources of fossil fuel like coal or oil fields.

Hydro power (hydroelectric power) plants convert the potential energy of water falling from a height into electrical energy. As the natural waterfalls are limited and their geographical distribution is not uniform, hydropower plants are built on dams. So, a number of large dams have been built across the globe for generating hydroelectric power. 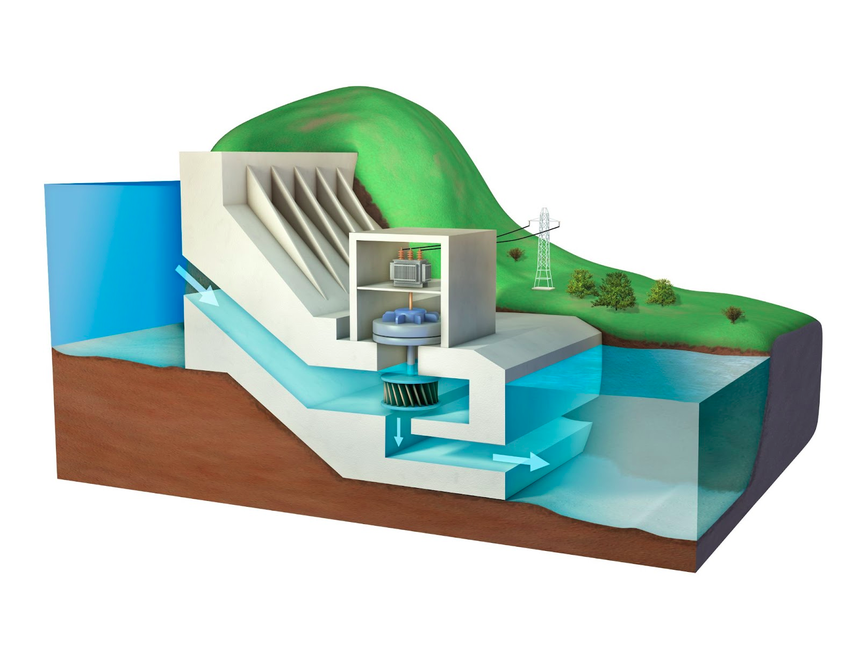 To produce hydroelectricity, dams are constructed to obstruct the flow of rivers to collect water in larger reservoirs. When the water level rises and the water is released, the kinetic energy of flowing water gets transformed into potential energy. The water collected in the dams at a higher level is carried through pipes, or penstocks, to the turbines situated at the bottom of the dam. The force of the water coming through the pipes rotates the turbines. The turbines of generators convert mechanical energy into electricity. Every time it rains, the reservoirs get refilled and the cycle goes on. As the resource (here water at a higher level) is replenished due to rain and more or less remains the same, hydroelectric power is considered a renewable source of energy.

Biomass is plant or animal based material used as fuel to produce electricity or heat. Some of the commonly used biomass fuels are wood, cow-dung, agricultural crops and waste material etc. However, they do not produce much heat on burning and also produce a lot of smoke. So, the following technological inputs are used: 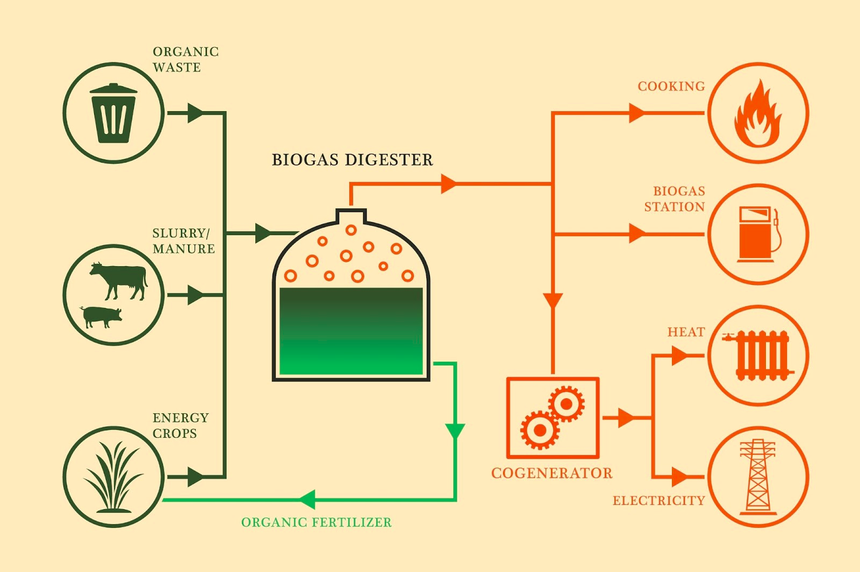 Biogas Plant: The biogas plant has a dome-like structure called a biogas digester, which is built with bricks. A slurry of cow-dung, domestic organic waste, crops residue and water is made in the mixing tank from where it is fed into the digester. The digester is an airtight chamber in which there is almost no oxygen. Microorganisms decompose or break down complex compounds of the mixture anaerobically. The process takes a few days to be complete and releases gases like methane, carbon dioxide, hydrogen and hydrogen sulphide after decomposition. The gas released is called bio-gas and is stored in the tank.

As biogas contains up to 75% methane (calorific value 55.4 MJ/kg), it burns without smoke and leaves no residue. Biogas is also used for lighting. After a substantial quantity of biogas is stored in the tank, the slurry left behind in the digester is removed periodically and used as manure, rich in nitrogen and phosphorus and can be used as an organic fertiliser. Biogas plants not only provide the best form of organic waste disposal but also give us biogas and organic fertiliser.

Do you ever wonder why the wind always blows? This is because gases always move from a high-pressure area to a low-pressure area. We call the rush of air from one place to the other “wind”. Now, what causes high pressure and low-pressure areas? The scientific explanation is that the differential heating of the landmass and water bodies by solar radiation creates a temperature difference between the two, which leads to air movement and causes winds to blow. And the differential heating of the landmass and water bodies happens because of their different heat capacity. The kinetic energy of the blowing wind is harnessed by windmills to turn it into electrical energy. In the past, windmills were mainly used for grinding grain to make flour. 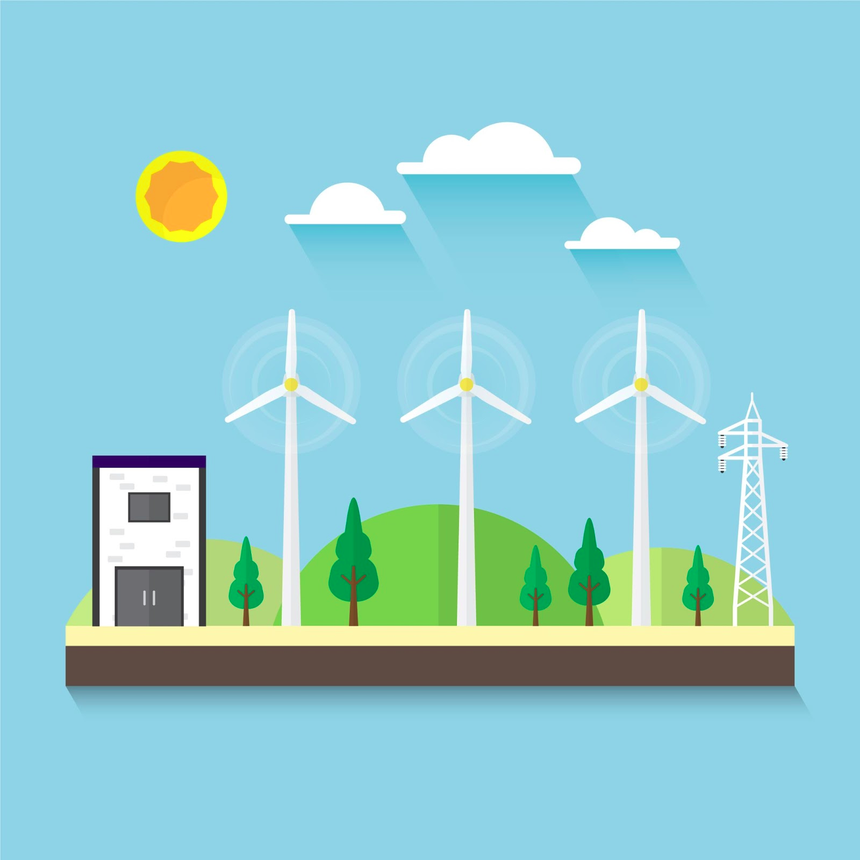 The blowing wind rotates the fan of the windmill which in turn rotates a turbine, leading to electric power generation. As the output of a single windmill is small, a number of windmills are erected over a large area for commercial viability. These are known as wind energy farms.The generation of electricity by harnessing wind energy is an efficient and environment-friendly method of utilising renewable energy.

There are many limitations to the generation of wind energy. They are listed below: 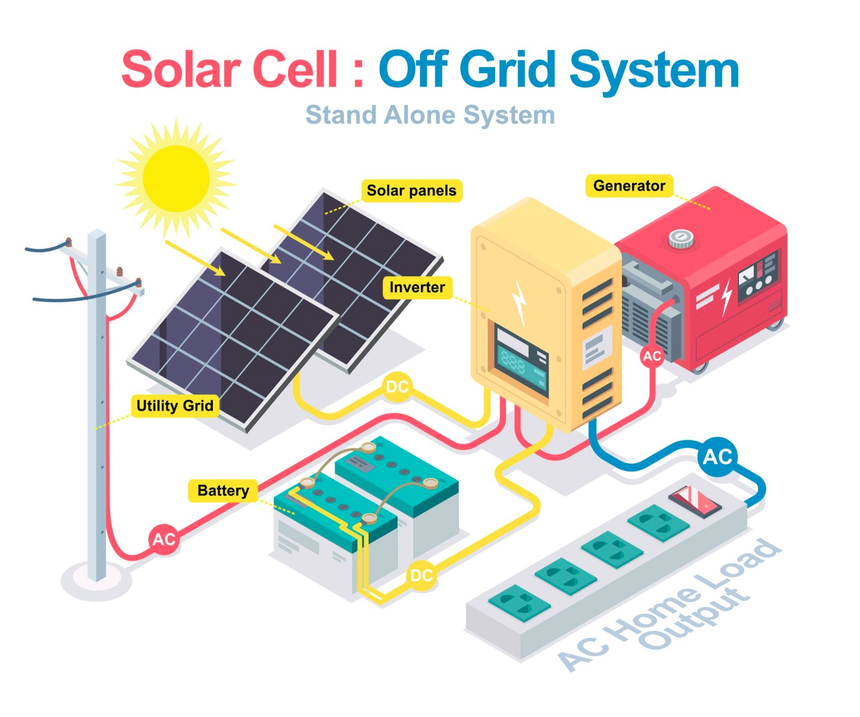 From ancient times, the sun has been revered in all civilizations because it plays a vital role in our life. Sunlight is important for farming and also for health as it is a good source of vitamin D. Sun is also worshipped by many communities and is part of their social and cultural life.

With the rise of the Industrial Age, the sun came to be considered a great source of energy. However, harnessing solar energy was neglected for a long period because of its high cost of generation, compared to conventional fossil fuels. This changed in the last two decades when we realised that the reserves of fossil fuels will not last for long. This led to huge technological interventions and research in harnessing solar energy and converting it into electrical energy.

According to the National Council of Educational Research and Training, or NCERT, “A solar cell, or photovoltaic cell, is an electrical device that converts the energy of light directly into electricity”. A typical cell develops a voltage of 0.5-1V and can produce about 0.7W of electricity when exposed to the sun. A large number of solar cells are combined in an arrangement called solar cell panels

Energy From The Sea 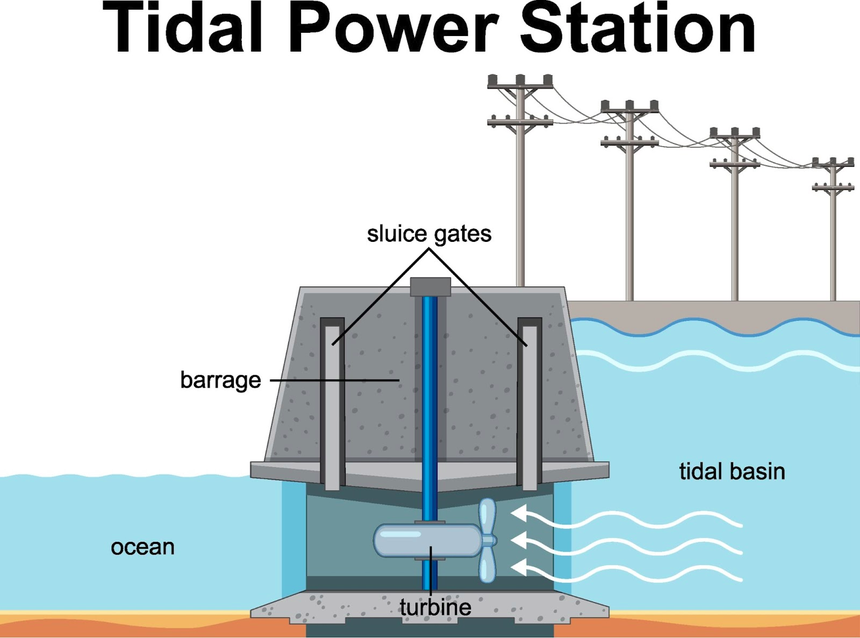 If you live near the sea or ever travel to someplace near the sea, try and observe how the sea-level changes during the day. Due to the gravitational pull of mainly the moon on the spinning earth, the level of water in the sea rises and falls. This phenomenon is called a tide. When the water level rises, it is called a high tide and when it recedes, it's called a low tide. Tidal energy is generated by harnessing the differences in sea levels.

Tidal energy is generated by constructing a dam across a narrow opening to the sea. A turbine fixed at the opening of the dam converts tidal energy to electricity.

The kinetic energy possessed by huge waves near the seashore can be trapped to generate electricity. The waves are generated by strong winds blowing across the sea. Wave energy would be a viable proposition only where waves are very strong. A wide variety of devices have been developed to trap wave energy for the rotation of turbines and the production of electricity. 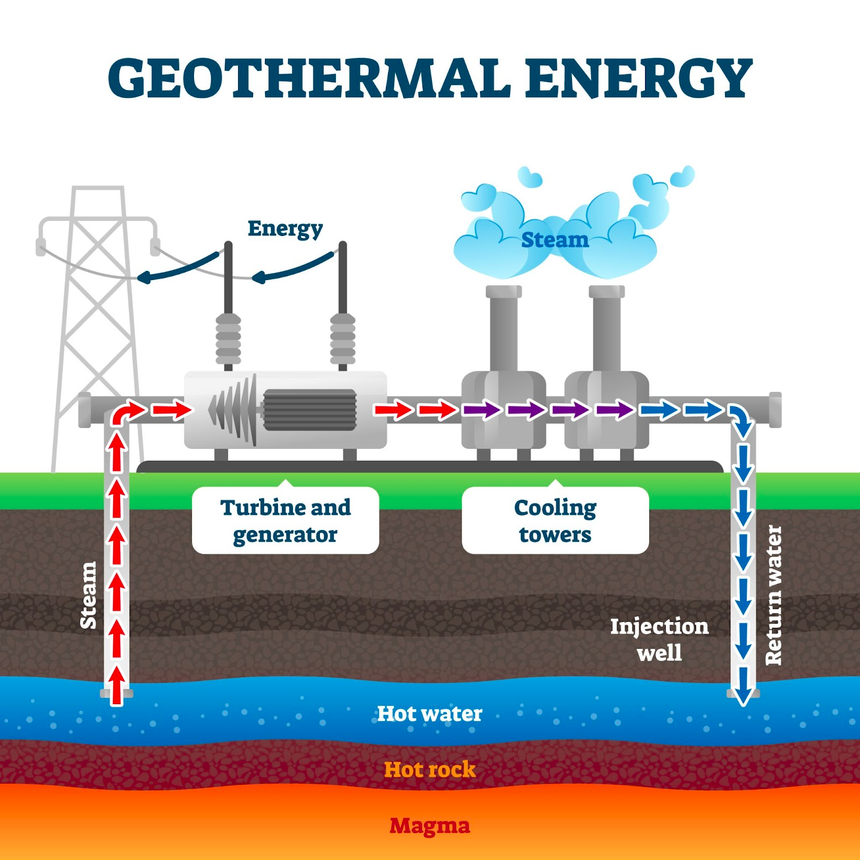 Geothermal energy is the energy within the surface of earth vented out with the evaporation of water when the underground water comes into contact with rocks heated by molten form of rock or magma. This produces steam. The steam is then routed through a pipe to rotate the turbine of a generator which produces electricity. After it is passed through cooling towers it is condensed and injected back into the earth surface. 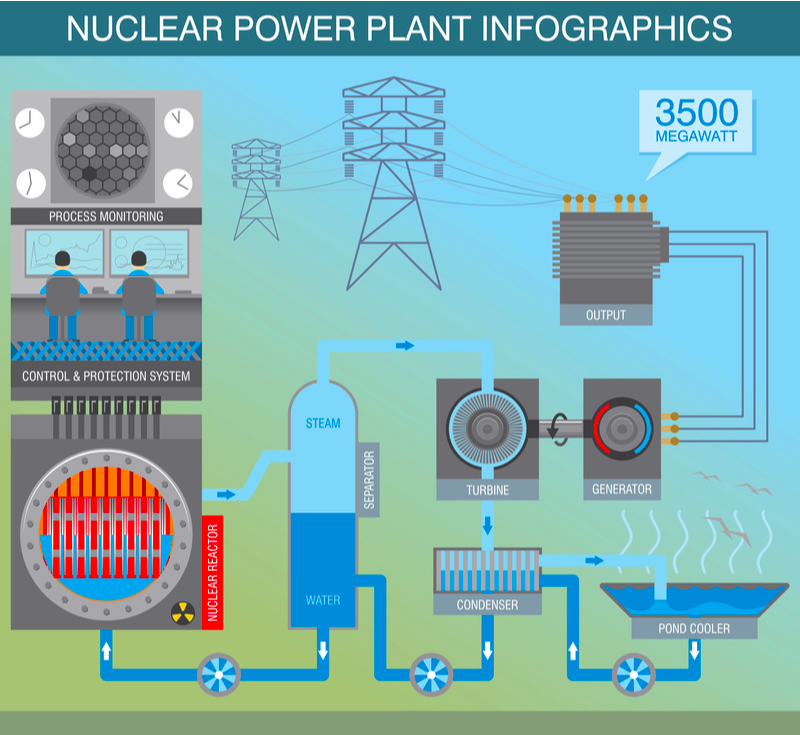 Nuclear energy is generated through a process called nuclear fission. In the nuclear fission process, the nucleus of a heavy atom (like uranium, plutonium or thorium) which are highly unstable when bombarded with neutrons, its nuclei can be split into two or lighter nuclei. This process is accompanied by the release of a large amount of energy if the sum of the mass of all the products is less than the sum of the mass of reactants then their mass difference is as per Einstein mass-energy relationship

The fission of an atom of uranium, for example, produces 10 million times the energy produced by the combustion of an atom of carbon from coal. In a nuclear reactor designed for electric power generation, such nuclear 'fuel' can be part of a self-sustaining fission chain reaction that releases energy at a controlled rate. The released energy can be used to produce steam and further generate electricity.

The environmental problems directly related to energy production and consumption are:

Bright Side: Renewable energy sources contribute a lot to the reduction of greenhouse gases emission. The world is now taking cognisance of climate change more than ever and the advancement of technology to harness renewable energy leading to the rapid adoption of these sources of energy is good news for all of us.

Dark Side: The construction of dams for hydroelectric power generation has to lead to very serious social and economic impact on the inhabitants of the place where they are constructed such as:

Bright Side: India's geographical position helps it get almost 300 sunny days a year which is a boon for the solar energy industry. India also has a 7517-kilometre long coastline for the installation of wind energy farms. With the upward trend in the adoption of renewable energy, barren lands are put to use for solar energy generation, creating income for landowners. The rooftop installations of solar panels is another positive trend. India's rural population also contributes to its energy needs through biogas plants. 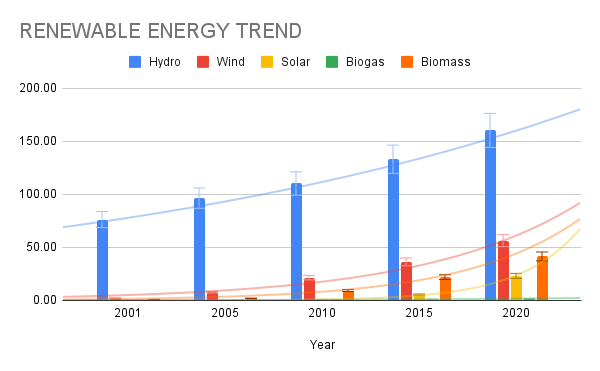 Energy generation in billion units (along the y-axis)